Teroborona is a term for Civil Defence Units formed of civilians who stood up to protect Ukraine. Many of my artist and musicians friends had to pick up arms and join Teroborona. This is a dedication to their courage and to the courage of all defenders. The song is rooted in Ukrainian traditional dance “Arkan”, one of true Ukrainian Hutzul spirit. All proceeds will go to Ukraine relief.

Video is produced by creators of “Kinodopomoga” Youtube channel.

It is also the opening track of the compilation “Artdopomoga” (Supportive Arts) featuring current Ukrainian artists responding to the Invasion. Produced by Ivan Derbastler. For more info: https://artdopomoga.com/shop/music/artdopomoga-vol-1-2022/ 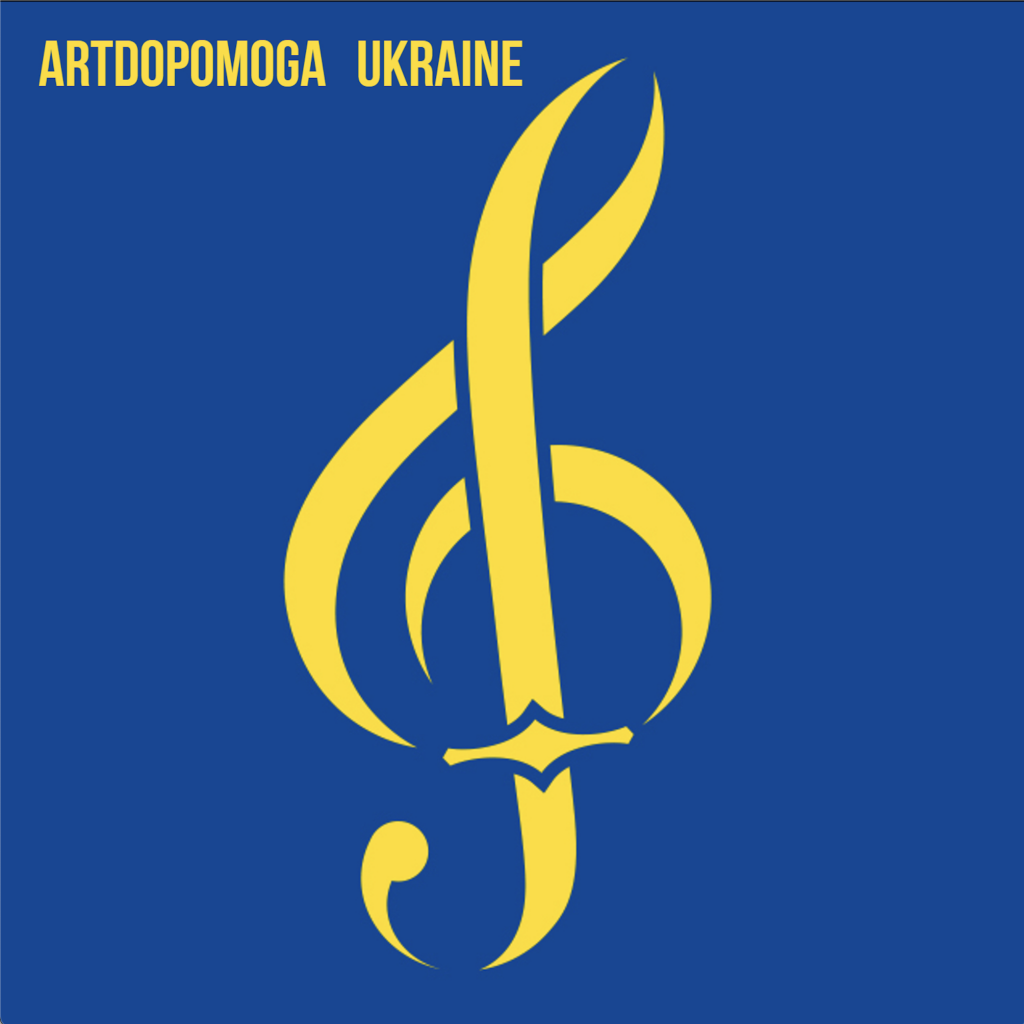 artdopomoga.com, the Ukrainian volunteer resource, has released its first compilation!

‘Artdopomoga Ukraine Vol.1’ (2022) includes a new Gogol Bordello track ‘Teroborona (Civil Defense)’, which was recorded in the early days of the war.

Also featured is Mandry’s ‘Towers’, recorded on a phone during combat duty in defence of Kyiv.

All proceeds from the release will be used to support Ukraine. Get yours here. 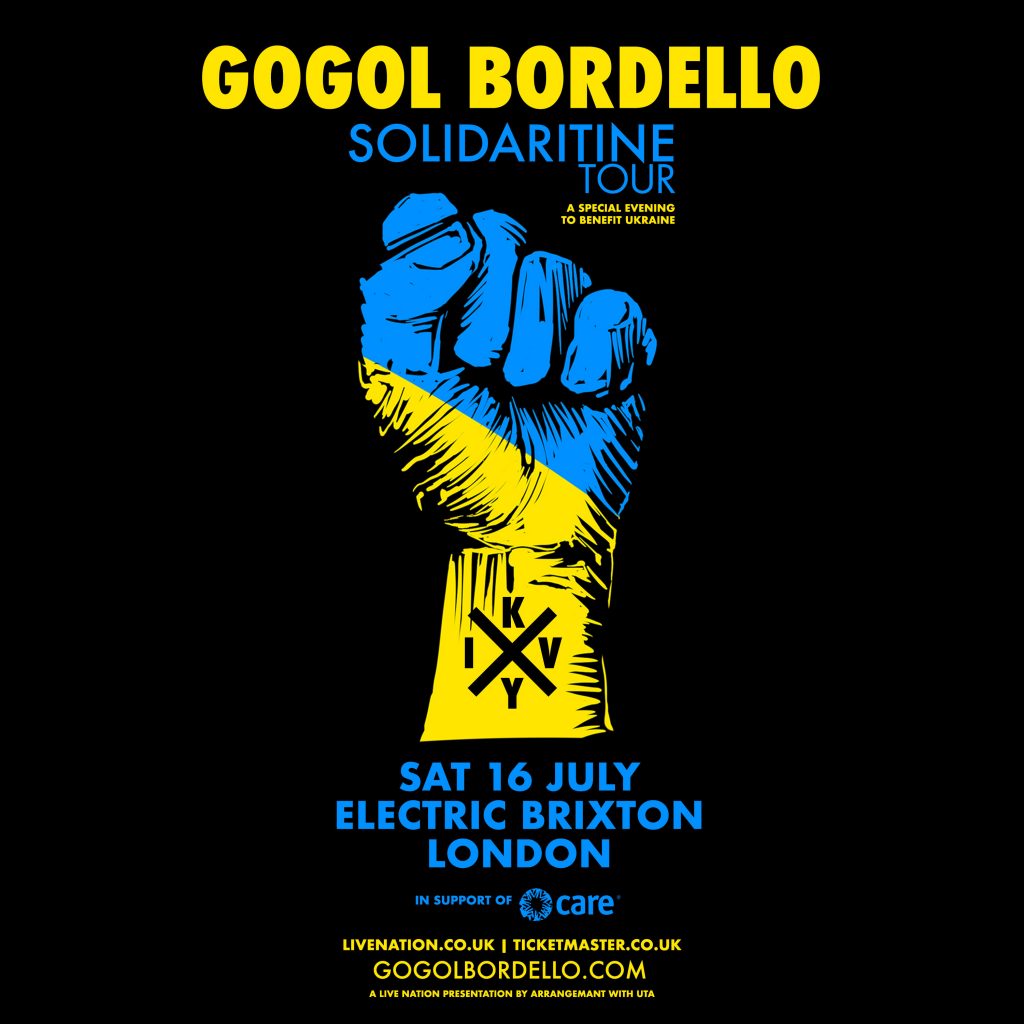 Gogol Bordello returns to London for a very special show on Saturday, July 16 at Electric Brixton. As the final show of the European tour, £5 of each ticket purchased will be donated to Care.org’s Ukrainian Crisis Response.

Presale tickets will be available starting Tuesday, May 10 at 10am BST: https://www.livenation.co.uk/artist-gogol-bordello-840. Tickets go on sale Wednesday, May 11 at 10am BST.

GB has also teamed up with Cauze, who will collect proceeds from the tour to donate to the Ukrainian Crisis Response, as well. For more info: https://cauze.app.link/tDUGnELegob 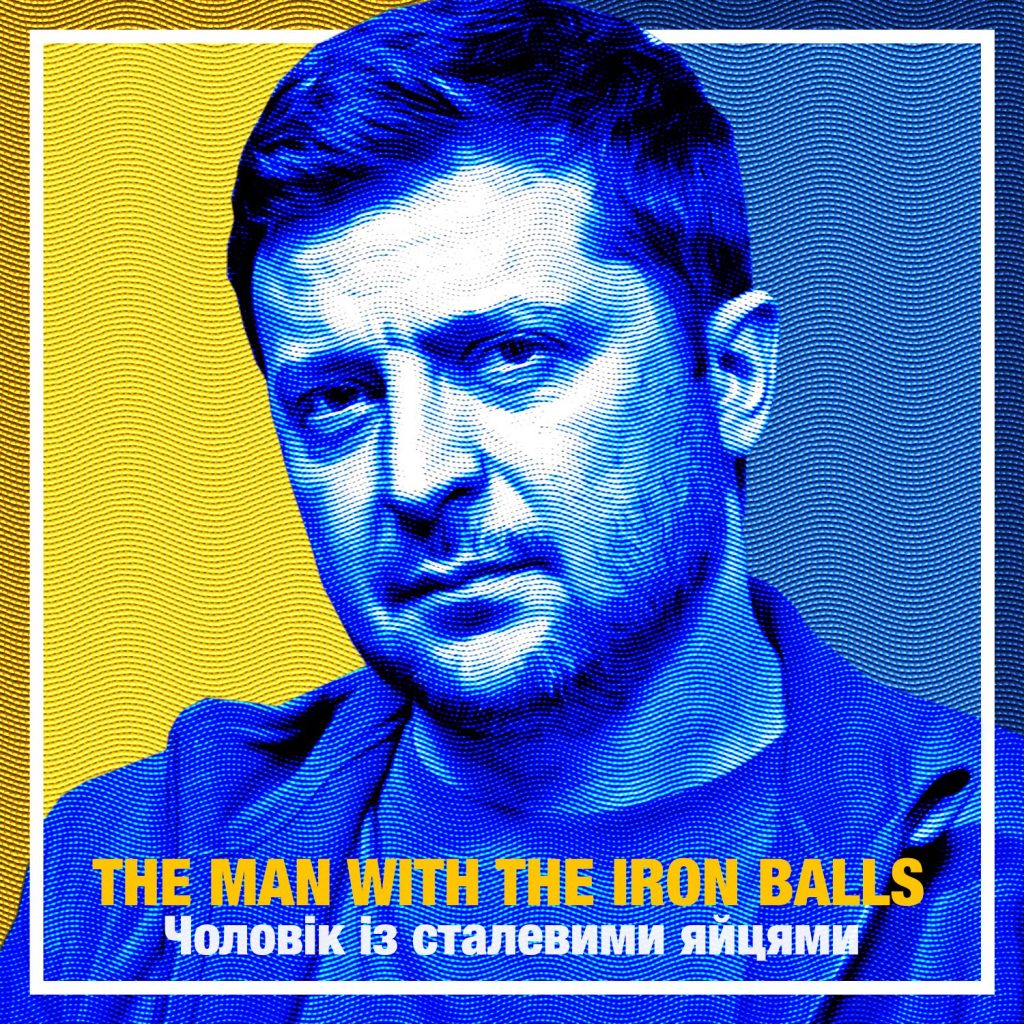 On the night of the Russian invasion of Ukraine, Les Claypool of Primus and Eugene Hütz of Gogol Bordello began collaborating on a joint release to rally support for the Ukrainian people. Premiered today via Rolling Stone and irreverently titled “Zelensky: The Man With the Iron Balls,” the track also features Stewart Copeland, Sean Lennon, Billy Strings, and Sergey Ryabtsev. Proceeds from the sale of the single will be donated to Nova Ukraine, a nonprofit organization dedicated to providing humanitarian aid to the people of Ukraine.

“As soon as Russian aggression broke out, Les and I connected to address the catastrophe ASAP,” recalls Hütz, a Ukrainian native. “We jumped on creating affirmative music that calls for unity and pays respect to the real doers in Ukrainian defense – such as President Zelensky, who demonstrated previously unheard-of stamina and heroism.”

“The night of the invasion, I was dining with close friends of mine from Poland who were hosting their family visiting the US from their town, which is 50 kilometers from the Ukraine border,” Claypool adds. “Needless to say, they were stressed and concerned about what was happening in their homeland. After a few vodka shots of solidarity, I started texting with my buddy Eugene from Gogol Bordello to get his perspective and insight. In that vodka-laced dialogue, we started mutually praising Zelensky for his surprisingly epic display of courage. ‘Zelensky has balls of steel!’ we agreed. It was then that we decided that some freaky, ‘East meets West’ art needed to be thrown that way.”

“After a couple weeks of file trading with Sean Lennon, Stewart Copeland, Eugene Hütz, and Sergey Ryabtsev, a visit to my studio by my buddy Billy Strings, as well as some enthusiastic rhythmic claps from local supporters of Ukraine, we now have a recording to help rally support for a bullied country and a David vs. Goliath-type man who stood up for their liberty, freedom and homeland.”

Hütz points out: “The reoccurring chant in the song, ‘Revolution of Dignity,’ honors the 2014 Maidan Revolution, which resulted in the removal of Ukraine’s pro-Russian President Viktor Yanukovych and lead to Russia’s military intervention against the people of Ukraine, the annexation of Crimea and the start of the Donbas War – part of the broader Russo-Ukrainian War. It is our way to show that heavyweights like Les, Stewart, Billy and Sean stand with people of Ukraine and the country’s sovereignty from the very start of Russian-led terror.”

“This is not intended to be a song of condemnation,” Claypool says. “This is a song of unity and anti-bully mentality, giving praise to a man who stepped up for his people beyond anything I’ve seen in my tenure on this planet. This unlikely fellow has grabbed the reins of leadership and held fast in such a way that the world is now galvanized in support. His legendary quote ‘We need ammunition, not a ride’ – Patrick Henry couldn’t have said it better himself. Zelensky is truly ‘The Man With the Iron Balls.’”

Stream the track on all platforms HERE

You can help Ukraine now! Gogol Bordello is proud to partner with ArtDopomoga, a team of art volunteers based in Kyiv who are offering artwork created during the war. Proceeds from your purchase of the artwork will go to support Ukraine in its fight against the invasion.

You can help Ukraine by purchasing stickers, posters, prints on fabric and t-shirts, music, and NFT.

ArtDopomoga is also partnered with the National Ukrainian Complex of Culture and Arts “Mystetskyi Arsenal” (Kyiv). 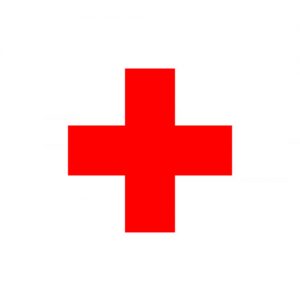 Ukrainians and all concerned people of the world !!!
Kindly share it with volunteer organizations, your friends and acquaintances. Whenever possible, please share this message in other languages.
Every day we are handling a significant flow of humanitarian aid. Among other things there are lots of articles of clothing, food and hygiene supplies. We are immensely grateful for the support! Unfortunately most shipments lack the life-saving tactical medical items, drugs and devices. We are in critical need of stretchers, medical backpacks, bags, blood clotting agents, plasma, etc.
Every day hundreds of Ukrainians are being killed in shelling and bombing, thousands are being wounded. Our medics are working round the clock and they need the supplies to save lives.
At the moment in Ukraine it is quite impossible to get the following items:
* Tourniquets: CAT GEN 7 (GEN6), SOFT, SAM – 10000 ea
* HALO CHEST SEALS, CELOX CHEST FOX SEAL and Comparable – 500 ea
* Hemostatic Bandages QuickClot Combat Gauze or Comparable – 5000 ea
* Burn Aids BURNSHIELD HYDROGEL (tube, spray, packet, dressing) and Comparable – 10000 ea
* Bandages ISRAELI EMERGENCY BANDAGE and Comparable in 4″, 6″ & 12″ – 5000 ea
* Compact Bags BVM Manual Resuscitator – 2000 ea
* Vein Tourniquets NAR BOA IV – CONSTRICTING BAND 30-0009 – 2000ea
* Tactical Medical Backpacks and Shoulder Bags – 2000 ea
@razom.for.ukraine @withukraine.eu @withukraine.america 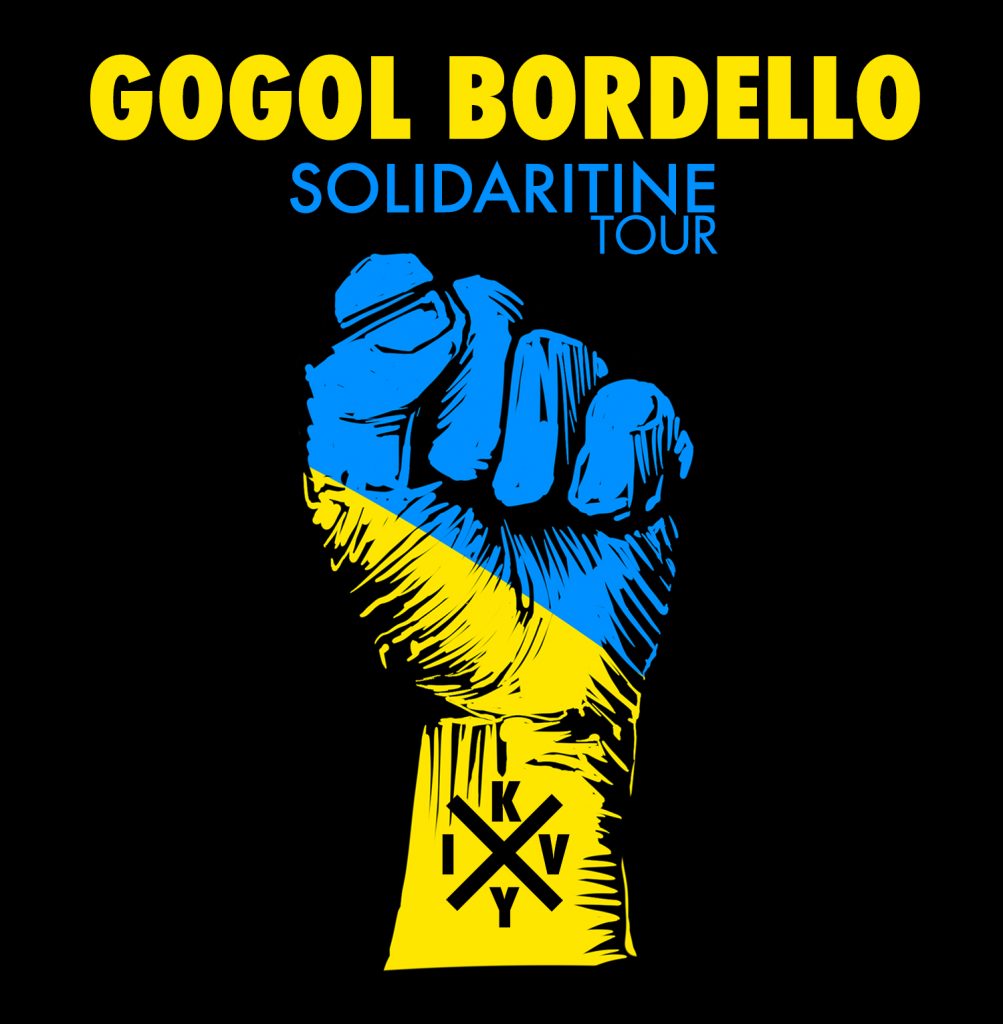 Gogol Bordello is going on tour to spread the message of freedom for Ukraine. Every show of the upcoming “Solidaritine” tour will be dedicated to the brave Ukrainian defenders, and a significant portion of proceeds will go to Ukraine’s battle for democracy. We will also partner with human rights organizations providing relief in Ukraine throughout the tour. Come stand in solidarity with us.

Amigo the Devil will join us for most dates. Check local venue listings for more info. Presale tickets will be available starting Wed, March 9 at 12pm ET: https://gogolbordello.shop.ticketstoday.com


Tickets on sale Fri, March 11 at 10am (local venue time) at gogolbordello.com. 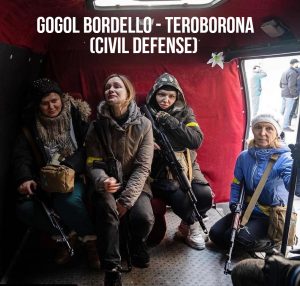 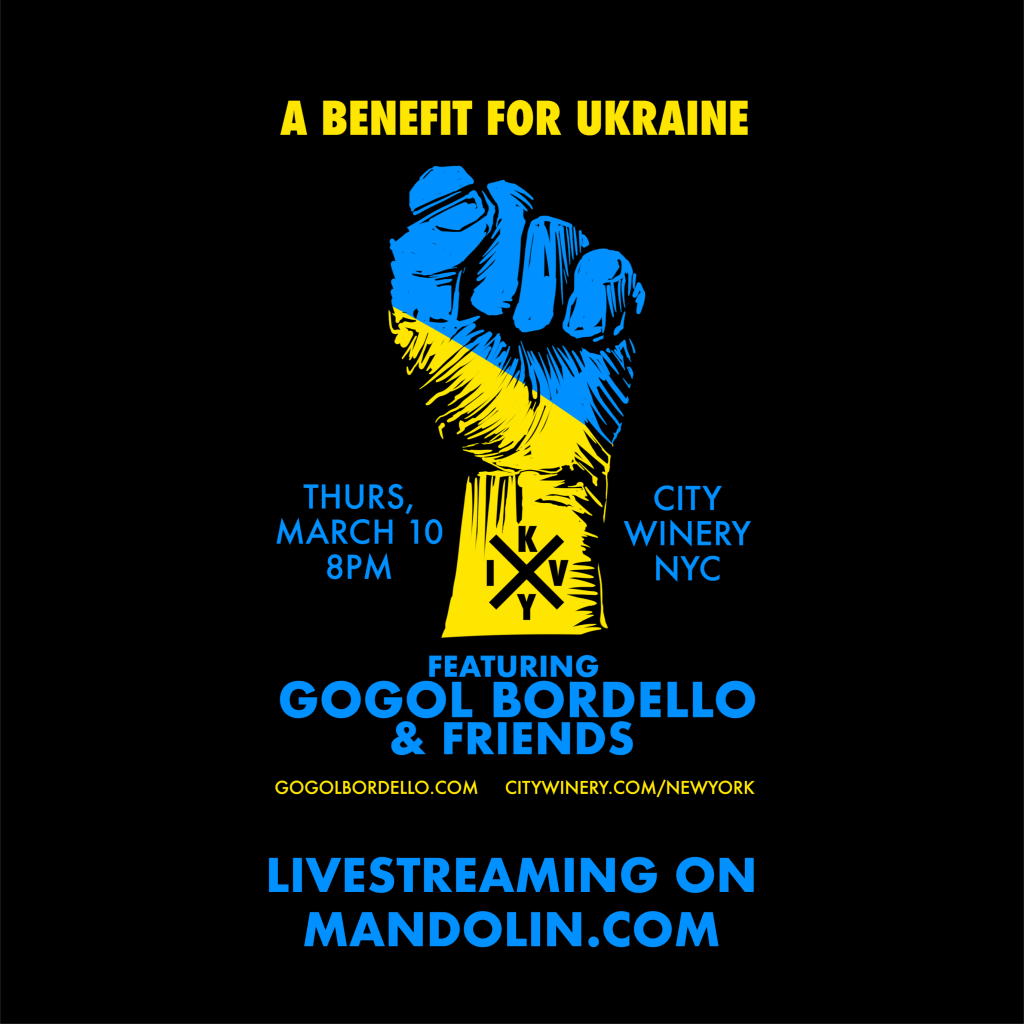 A Benefit for Ukraine is SOLD OUT! A livestream option is available for those who can’t make it to the show. Buy tickets HERE.
Proceeds from the stream will also benefit the Come Back Alive foundation. Since its birth in 2014, Come Back Alive has become the largest foundation providing support to the Ukrainian Armed Forces. To donate directly to Come Back Alive click HERE.